So here's the story about how it all began.

When Jan was 10 years old, he had some pigeons in a farm in Tønsberg, he didn't race them but had great pleasure with the daily rutines and watching them flying outside.

15 years old he went working at sea and of course he had no time for pigeons at home.

As he were working at the sea, some pigeons arrived the different boats and he feed them and caerd for them, and the pigeons cirkled around the boats just like they do around their homes.

In 1967 he seriously began workin with racing pigeons with Karl Boxern. In 1969 he and his wife Karin bougth their own house in Nordalveien, and Jans father buildt his first loft. Jan got some eggs form Thorleif Hansen "Folan" and laid them under his own pigeons as fosterparents.

At that time "Folan" had the best racing pigeons around Oslo, his stock went all the way back to 1920. Under the world war he hid his pigeons in the basement feeding them with potato skin. The pigeons strain were from the Netherlands.

These eggs gave really good pigeons. They won longdistance races and they bred very well. Their footprints are still in our breed, and already early in the 70's Jan began winning championats in his Federation, gruppe 1.

In 1975 Jan imported some pigeons from Alf Baker (Stassart), England. Crossing these pigeons with those from "Folan" gave "cream - pigeons," and theese pigeons won the longdistance in our federation in the 70's, 80's and 90's.

In the middle of the 80's we also imported some Huskyens Van Riels from Arne Ask, Sweeden, these pigeons also marked them selves in our strain.

While Jan was working at the sea, Karin caerd for and trained the pigeons, she was resposible for two Federation averages all by herselves.

In 1982 Jan buildt a larger loft with room for more pigeons.
Snorre first showed intress for the pigeons in 1984 and the next year he raced the young birds. They won the Federation average and Snorre won the federation young birds average.

In 1989 the garage were buildt including a pigeonloft in the loft. There were also imported 16 Busschaerts from Louella Pigeon World, England. In 1994 Karin and Jan bought the neighbour property and the pigeons were moved to the new loft in Skogvollveien.

In 2001 Jan bought 10 Houben pigeons from Ingolf Laursen, Denmark. Later we have also imported pure Emiel Denys pigeons, pure Janssen from Gbr. Pouw and pure Kiekebelt from Ulrik Lejre Larsen. The last years we got some Rauw-Sablon, Koopman, and a fullbrother to "East of Eden" the winner of Sun City One Million Dollar Pigeon Race

Today our old lines are the basic in our breeding loft. We mainly use imported pigeons to cross with our old lines.

I (Marianne) had never heard about racing pigeon competitions before I met Snorre in 2004. In 2005 my dear father - in - law registrated all his young birds in my name, in the end Snorre also did the same with his young birds. So I was kind of "thrown" into this sport. Well I did my best and ended up as number three in the federation young bird average. Ever since I've been active both in the practical work with the pigeons and also with the theortic part as pedigrees and this homepage.

Snorre and Marianne runs the loft in Skogvollveien and Jan runs the garageloft in Nordalveien.

We are all members of Oslo Brevdueklubb (Club) and gruppe 1 (Federation).

Marianne is secretary in Oslo Brevdueklubb and Snorre is foreman in gruppe 1. 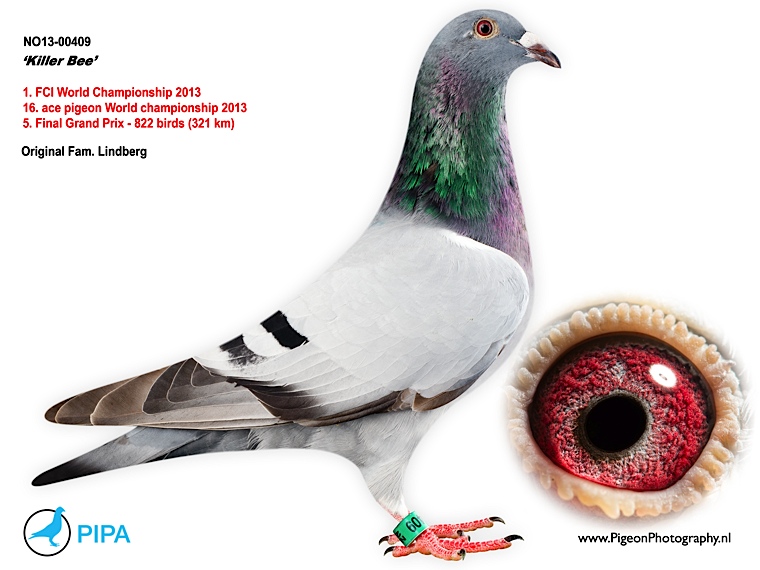